Matthew 15:1-3 Then some Pharisees and teachers of the law came to Jesus from Jerusalem and asked,  “Why do your disciples break the tradition of the elders? They don’t wash their hands before they eat!” Jesus replied, “And why do you break the command of God for the sake of your tradition? 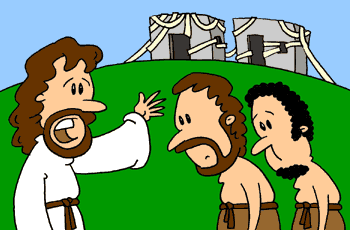 Some scholars have opined that this incident may have occurred inside a house of a Pharisee. But what did the ‘tradition of the elders’ mean? It is estimated that they joined a set of about 650 complementary laws. If accomplish the Law was impossible, imagine putting the leaven of the Pharisees !!! The leaven of the Pharisees was the great mico (brazilian giria about action or failure to understand correctly) that jewish society accepted.

Jesus perceived the people greatly oppressed and burdened by the religious system. On the one hand, Galilee had remarkable religious syncretism. On the other hand, Judaea was hardened by religious legalism. That kind of religion did not offer what people needed: personal relationship with God. So that generation had the privilege of witnessing Immanuel, God with us. Jesus was the promised Messiah. And whoever expected and knew the Scriptures, was convinced that He was the Savior. I agree that it was a shock to discover that Jesus would not deliver the Jewish people from the Roman Empire. But He freed people from the yoke that truly entangled them. The liberation of the Romans would come at a time determined by God. The purpose of Jesus was to produce spiritual deliverance in the disciples to form a free group of the power of satan.

This liberating power would then be radiated to the other civilizations of that time. In my time of study of Physics I learned about the 3 ways of heat transmission: conduction, convection and radiation. If we compare the transmission of the gospel to that of heat, we would have:

The teaching of the Pharisees gave heavy burden above people. Religious legalism bore falsehood. That is why Jesus cried out: “You who are weary and oppressed. Learn my words because I am patient and humble. Change these traditions by my yoke.” That was the proposal. This is the proposal for postmodern man!