They represent the third largest cluster of congregations in the country, following the Roman Catholic Church and the Southern Baptist Convention; second largest number of churches – following the Southern Baptist. Overall, this research found over 35,000 churches representing more than 12,200,000 adherents. In total, four percent of the US population worships in an independent or nondenominational church.

And the phenomenon is on the rise. Our study identifies a larger number of people engaged in nondenominational churches than Barry Kosmin found in the American Religious Identification Survey in 2008 where they estimated 8 million or 3.5% of 173 million Americans identified as Christians would be categorized as nondenominational. In their records, this count was up significantly from only 0.1% or 194,000 in 1990. According to the General Social Survey, the percent of Protestants claiming “no denomination or non-denominational” has risen from roughly four percent in the 1970s to fifteen percent in 2006. (The Ties that Bind: Network Overlap among Independent Congregations Christopher D. Bader Christopher P. Scheitle and Buster Smith).

Pew’s Religious Landscape Study also found significant numbers of Americans affiliate with independent and nondenominational churches, although the exact number and percent is not entirely clear given how they divided their labeling. It is absolutely clear, as Kosmin said recently, that “The rise of non-denominational Christianity is probably one of the strongest trends in the last two decades…. It is nearly as sharp an increase as the no-religion response.” Additionally, the Baylor Survey of Religion report claims non-denominational churches are the fastest growing Protestant churches in America and in 2006, as now, the second largest Protestant group just behind the Southern Baptist Convention.

Nondenominational churches are present in every state and in 2,663 out of the total of 3,033 counties in the country, or 88% of the total. They are the most dominant religious reality in 46 counties around the country. This collection of nonaffiliated churches, seen as a single entity, is among the top five religious groups in 48 of the 50 states and the District of Columbia. 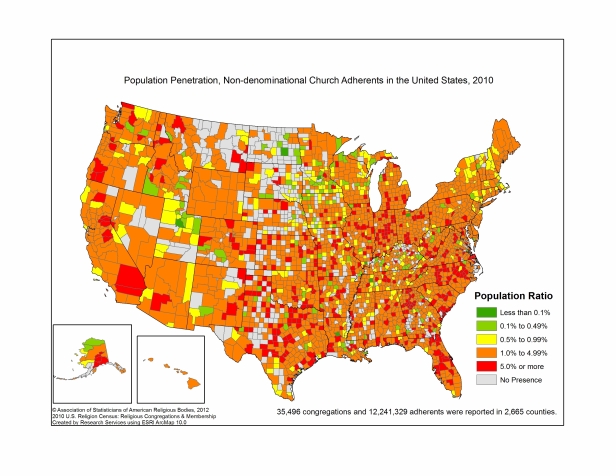 The 2012 Religious Congregations and Membership Study shows that the mainline Protestants and Catholics who dominated the 20th century are literally losing ground to the rapid rise of Mormons and, increasingly, Muslims.

The study is conducted once every 10 years and can track Americans’ religious affiliation down to the county level, from the largest (Los Angeles County, where Mormons grew 55% while Catholics shrank by 7%) to the smallest (Loving County, Texas, which is home to 80 people and one nondenominational evangelical church).

Romney’s Church of Jesus Christ of Latter-day Saints reported 2 million new adherents and new congregations in 295 counties where they didn’t exist a decade ago, making them the fastest-growing group in the U.S. Mormons were the fastest-growing group in 26 states, expanding beyond their historic home in Utah to the heart of the Bible Belt and as far away as Maine. Muslims came in second, with growth of 1 million adherents in 197 new counties, to a total of about 2.6 million. Overall, non-Christian groups grew by 32 percent over the past decade.