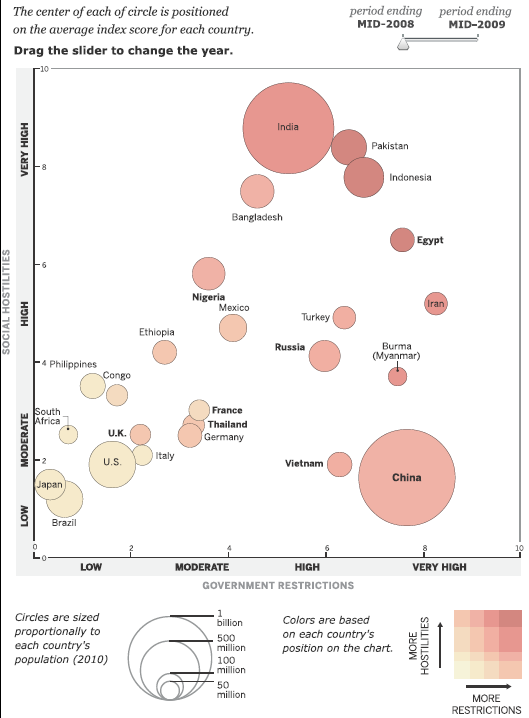 More than 2.2 billion people, nearly athird (32%) of the world’s total population of 6.9 billion, live in countries where either government restrictions on religion or social hostilities involving religion rose substantially between mid-2006 and mid-2009, according to a new study on global restrictions on religion released today by the Pew Research Center’s Forum on Religion & Public Life. Only about 1% of the world’s population lives in countries where government restrictions or social hostilities declined.

These are among the key findings of Rising Restrictions on Religion,the Pew Forum’s second report on global restrictions on religion. The study is part of the Pew-Templeton Global Religious Futures project, an effort funded by The Pew Charitable Trusts and the John Templeton Foundation to analyze religious change and its impact on societies around the world.

Other major findings include:

Among the world’s 25 most populous countries, which account for about 75% of the world’s total population, restrictions on religion substantially increased in eight countries and did not substantially decrease in any. In China, Nigeria, Russia, Thailand, the United Kingdom and Vietnam, the increases were due primarily to rising levels of social hostilities involving religion. In Egypt and France, the increases were mainly the result of government restrictions. The rest of the 25 most populous countries, including the United States, did not experience substantial changes in either social hostilities or government imposed restrictions.

The growing perception of religion as a threat to a free society is leading to persecution of believers around the world, according to speakers at a recent meeting of the U.S. bishops. “Religious liberty is in global crisis,” said Thomas F. Farr, director of the Religious Freedom Project at the Berkley Center for Religion Peace and World Affairs at Georgetown University.

He explained that the crisis has “enormous consequences for the Church, the United States, the fate of democracy worldwide, the defeat of religion-based terrorism and the cause of international peace and justice.”

Farr spoke June 13 to the U.S. Conference of Catholic Bishops as part of a two-hour discussion on both domestic and international religious freedom concerns. His address came during the conference’s June 13-15 general assembly in Atlanta, Ga.